At 21 years of age, I flew into New York City, alone, on American Airlines.  The company had allowed me to check two bags, therefore I chose the largest I could find and threw in everything I could think of.  I navigated one of those push carts and finally made my way to the taxi pickup area.  The horns honking and people shouting were just like in the movies.  I smiled at all the noise. It seemed so exciting. I was a Flight Attendant living in New York City.  Yes I know I hadn’t unpacked, or found a place to live, but that would be easy it’s NY City, there must be a million places to live.

Fortunately I was meeting three other new hire Flight Attendants at the Milford Hotel in the city.  When you are a New Yorker, you start calling it “the city.”  The Milford Hotel at that time was one of our layover hotels, until a maid was found stabbed to death in one of the bath tubs.  The rooms were tiny, really tiny, but on a new hire salary, all four of us were sharing one room.  I still don’t know how we got all of our luggage in that little box.  It was wall to wall luggage and lipstick.  One of the girls from Dallas TX had lived in a larger city, and actually had a plan.  She had scoured the papers and magazines for rentals, but at the disappointment of most of us, our budget would end us up in Queens instead of “the city.”

We were the first Flight Attendants to move into 119-40 Metropolitan Ave., Kew Gardens, Queens.  The building was family owned, and we all knew the owner and head of the family as Frank.  Frank and his sons, made it a point to be very good to us, even picking us up in the family station wagon to move us from the Milford to Queens.  The apartment building was brand new and very nice.  We even had an intercom to buzz folks in when they came to visit. Pretty hi-tech for where I came from. We furnished the two bedroom apartment with modest means.  The bed I purchased was a futon type thing. Early on I knew that I would never truly call New York home. Exciting and fun that it was, the big city life was great to visit, but as the saying goes, “I wouldn’t want to live there.”  To this day, New York City is one of my favorite cities to visit.

After about a week in New York, I flew my first trip.  Back then the crew would sometimes play jokes on the new hires.  I was asked by the Captain to take an air sickness bag into the cabin, capture an air sample, and bring it to the cockpit.  Luckily about half way through the retrieving of the bag, I realized it must be a joke.  I was also put into the overhead compartment in first class.  I was pretty small back then.  The agent failed to give the crew a heads up that we were boarding, so first class passengers got a peak at the crew trying to get me out of the bin.  My first layover was on the beach in Ft. Lauderdale, I still have a photo somewhere of me and the crew on the beach having a cocktail. I knew I was going to love my job.

My second month in New York, I was on what they call Reserve.  I had certain days off, and the rest of the days I had to be on call to the company.  I carried a beeper and the one who had my number was crew schedule. I was on call to three different airports, so my bag always stayed packed and ready to go. Flight attendants on reserve kept two staples in their bags, a swimsuit and a sweater because you never knew where you might end up.  I was still a huge country music fan and on one evening I went to a concert at Madison Square Gardens.  Alabama and The Judds.  Half way through the concert my beeper went off.  I was given an assignment for early the next morning.  I don’t remember going to bed that night.

In the small area where we lived in Kew Gardens, we felt almost like celebrities.  Everywhere we went we were asked if we were Flight Attendants.  Looking back, we were all young, cute, girls with accents from other parts of the U.S. and we hadn’t quite made our way in the craziness, so I’m sure we stood out.  Back then I didn’t mind standing out, I liked the attention.

I became pretty good at getting around using the subway system and buses.  I loved going into the city.  We would go shopping, out to clubs, and sometimes just walk the city to see the sights.  I didn’t realize back then that I wasnt’ be very smart at times with my travels.  I would take the subway alone and sometimes come back later at night than I should have.  I was flashed by a middle aged white man, and mooned by a crazy man, but I was never hurt or robbed.  I learned to walk like I was on a mission.  That first few months I saw Donald Trump, Cindy Lauper, and Cheech Marin from Cheech and Chong.

Then one day the announcement was made.  American Airlines was opening a Flight Attendant Base in Nashville, TN.  Yee-Haw pick me….and they did. 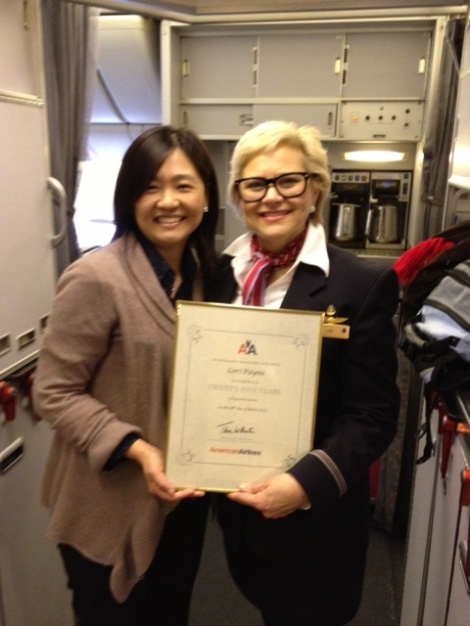 Hi friends arrived in London yesterday at 7:30 am, suppose to leave this morning, ,,but we are cancelled.  I didn’t realize when we left that there was a rather large snow storm here on Thur. and Friday, we  are expecting more snow tonight.  Considering getting out  for my day off in London, but it certainly is bitter cold!! On a fun note I had the privledge

END_OF_DOCUMENT_TOKEN_TO_BE_REPLACED

Darn…..A Saturday night and I missed my flight home by literaly 5 minutes.  Called the agent when I arrived at La Guardia to let her know that I was running if she could possibly wait until the last minute to shut the door.  Sometimes, actually more often than not, they close the doors early when everyone is onboard.  Everyone that is except non-revs.  Non-Revs, that would be me.  When you fly on a pass (free) you are called a Non-Revenue passenger.  Some of us employees are nice to each other and do our best to help one another and some do not. I don’t think this agent cared one iota that I was running for the “last flight of the night to Nashville.”  When I got to the gate, I could see the aircraft out the window.  The jetbridge door was closed and locked so I proceeded to take my key out, open the door, and sprint to the end of the jetbridge.  I should say at this time I am pushing it just a little.  Once the door is closed to the terminal that is suppose to be the signal to anyone  and everyone that the flight is gone, closed out, on its way, look for a blanket or a hotel.  When I get half way down the jetbridge the agent starts yelling “It’s gone, had to close the door, couldn’t hold it.”  She had closed the door 10 minutes before departure, which is certainly within her rights to do and is often done.  I stopped in my tracks said #$#&^* to myself, and then ” Ok thank you for trying” to the agent.  Do I believe she tried to help me?  #&%# no, but that is the way that I handle things today, except for the unlocking the door and running down the jetbridge part, I probably shouldn’t have done that.  But for the most part I try to accept the the things I cannot change.  I used to run the show in all aspects of my life, and then notify God if I needed some help.  That type of thinking got me into alot of trouble.  My friends in recovery pointed out to me a page in the AA book which talks all about acceptance and how it holds the key to all of my problems today.  Accepting that things are exactly as they are suppose to be at any given moment.  Really?  Was I suppose to miss my flight?  Still not sure.  I am on a plane home this morning, and missed church….was that God’s plan?  Surely not.  Then I also think about James 4 where it talks about “You do not have because you do not ask. ”  I stop again dead in my tracks.  Did I ask God to allow me to make my flight home?  I called the agent and asked….I was pro-active, right?  But did I ask the living God, the one who controls my every breath?  Truth is …..no.  In all my rush I did not talk to the one who truly is the key to all my problems today.  Would he have answered me?  Of course he would.  He may have said “No my plan for you is to spend the night here at this stinky, lousy, crowed  La Guardia Airport tonight.”  Or he may have held that door to the American Eagle plane and rolled out the Red Carpet.  I won’t know, because I didn’t ask.  My lesson today was and is, turn to God first in ALL things, then accept his answer.  Blessings Friends!

We have received several reports from the hotel in Barcelona indicating that crew members have been using the room irons to grill sandwiches.  These irons have been replaced however, we have been advised that in the future crew members will be personally charged for any iron or property replacement due to inappropriate use according to their policies.

Thank you for your cooperation 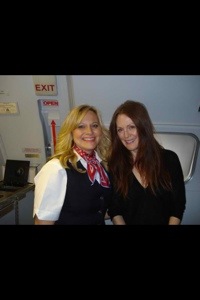 Lady purchases a blanket on the airplane…orange juice is spilled on the blanket by Flight Attendant.  Blanket is replaced with new one….lady says ” Thats not good enough…this must be documented!!! ”  Should I Call Fox News???

Had the pleasure of meeting Taylor Lautner and his Dad today…Just some of the perks of flying….

Have any of your ever brought one of those cute little turtles on an airplane?  They sell them all over Florida, and I have seen them on Canal street in NYC.  This poor little girl, didn’t get away with it.